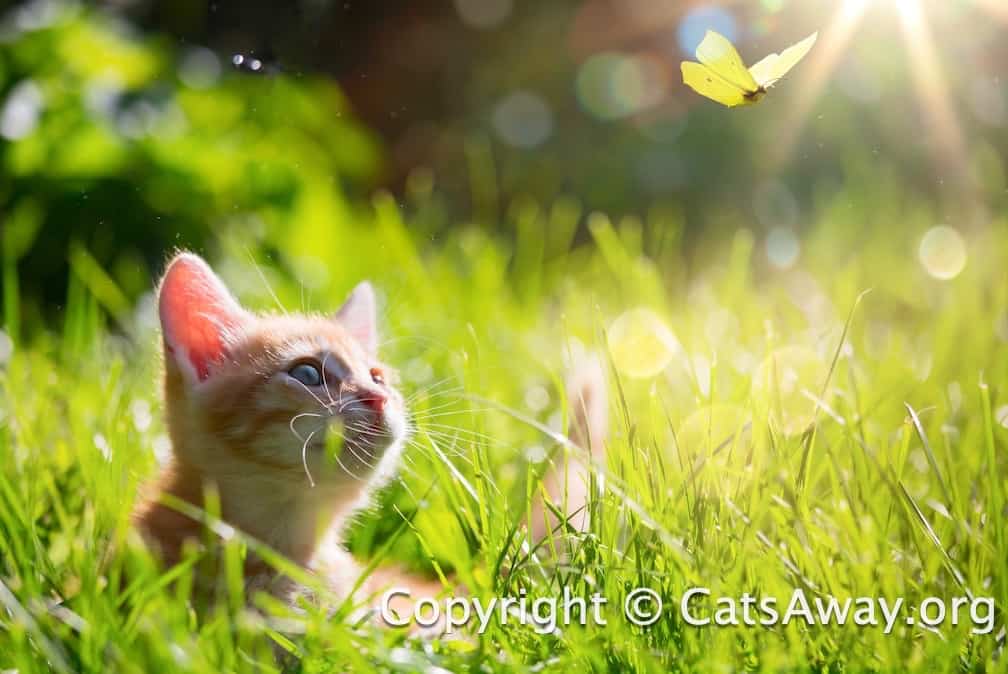 Using  cat repellent plants is as natural as you can get in your battle to deter cats from your garden and this will appeal to those people who for whatever reason can’t or don’t want to use any of the commercial cat deterrents.

In the UK cats are allowed to roam wherever takes their fancy and if you are a gardener who doesn’t want them visiting your garden, using plants to deter cats is going to make a lot of sense.

A few strategically placed plants that cats hate should mean they get to exercise their right to roam by quickly moving on rather than pooping in your flower beds or sunbathing in your vegetable patch.

So lets have a look at the plants you might want to consider using….

Some bright spark in Germany bred this hybrid with the specific intention of producing a plant that keeps cats away. It is also said to work on dogs, rabbits and foxes too.

I purchased half a dozen Coleus Canina as plug plants when they first became available in the UK. I found them very easy to grow and kept them in containers placed around my decking where cats were entering the garden.

Coleus Canina  prefers a sunny spot although they will grow in shade and are drought resistant but they aren’t hardy and need protection from frost.

Coleus Canina plants smell pretty bad if you brush by or touch them so you probably won’t want to position them directly outside your back door or under your kitchen window.

Also, you will need a greenhouse or cold frame to get them through the winter months.

In my experience most cats at least try to avoid the Scaredy Cat, with many giving it a wide berth. I have seen at least one old Tom walk straight past one – but like humans cats lose their senses as they get older.

Coleus Canina is a nice looking plant with pretty blue flowers in the summer. They grow and spread about 40cm at their peak after 2 years and you can expect to pay around a tenner for half a dozen from Nurseries or a quid each if you purchase online from here.

Another plant that works particularly well at repelling cats is Rue, also known as common Rue and herb of grace or to give the plant it’s proper name Ruta Graveolens. Rue can grow to up to 70cm (about 2.5ft) tall and wide and has a powerful odour.

It is a semi woody perennial with a nice grey green colour with yellow flowers. Or try the Jackman’s Blue variety for a metallic blue-green colour.

It is a native of the Balkan Peninsula and was introduced to Britain by the ancient Romans. It was originally grown for its herbal qualities and used for a variety of medicinal purposes.

It is hardy and likes full sun and can grow in hot dry climates and in poor soils. It will be happy enough in part sun spots but may produce a different colour foliage. For my North American readers I’m told it’s fine in Zones 4 to 9.

Rue will repel cats from its vicinity but you can also collect and spread dried Rue leaves on your beds and in your pots.

I will be growing Rue this year (2018) so will report my findings later in the year.

Seeds should be planted between March and May in the UK. You can purchase ready grown in pots for a few quid here.

If Coleus Canina (the Scaredy Cat) or Ruta Graveolens isn’t for you, here’s a few other cat repellent plants you might want to try.

Helichrysum Italicum (aka the Curry herb plant) and Lemon Balm plant are strongly disliked by most cats and are often purchased together by gardeners in the know to be planted in their borders.

Cats find the odour from both unpleasant and the course texture of the Curry plant is said to irritate them if they brush by it. If grown into tight bushes the Lemon balm too is irritating enough for cats to avoid going near it.

Planting around your boundary will deter cats from entering your garden or if this isn’t practical, adding them to your beds and borders should stop them being used as litter boxes.

You might also want to grow a few in containers so they can be moved to troublesome spots. For example, placing on the path to your back garden can stop cats using it as a point of entry.

Both these cat repellent plants are said to be easy to grow and for most of us the smell is not unpleasant. As an added bonus you can make a tea with the Lemon Balm leaves which is said to be a tonic for common colds, stomach cramps and headaches. Bees and butterflies are said to be attracted to the Lemon balm too.

I have as yet not tried either of these plants but plan to grow them this year. You can either grow from seed or purchase as plugs. If your garden centre doesn’t have any then you can order online from here.

Rosemary – Rosemary is a wonderful perennial that smells lovely, is great for cooking and as an added bonus, many cats hate the smell! The only problem is that it needs a warm and dry climate so in the UK you are probably best to grow Rosemary in containers.

Lavender – Borders with sways of Lavender plants smell and look gorgeous to us but not to a lot of cats. Occasionally though you may find a cat will come along that likes the smell of Lavender.

The tall varieties seem to work best as cats won’t jump over something if they can’t see where they are going to land.

Ground Cover – Cats go for bare soil when it’s time to find itself a toilet so grow some ground cover such as Perennial Geraniums to hide these spots. It can make a garden look too cluttered for some tastes though so instead of planting the area you could instead spread your rose or other suitably thorny cuttings over the bare spots.

Hawthorn and other Prickly Bushes

Talking of thorns, there are many prickly plants that will deter cats, dogs, foxes and even human intruders from your home if strategically placed around your garden.

The downside is that by their prickly nature they can be difficult to look after and you will want to think carefully if you have toddlers regularly in the garden.

Unlike the Curry plant, Lemon Balm and Coleus Canina, thorn bushes cannot be simply jumped over. They can though, like all these plants be walked around so you need to do some planning before planting and because of your particular garden layout using cat repellent plants might not be practical.

Of course, plants take time to grow and so you can think of them as a cat repellent for the months and years to come. If you need something that is going to work straight away you should check these commercial cat deterrents.

Before deciding whether to try a plant as a cat repellent we first need to find out if the cat likes or dislikes the aroma. Here’s my findings so far on the peppermint plant. Do cats like peppermint? Many cats do not like the smell of peppermint as it contains Salicylate which is poisonous to…

How To Keep Cats Out Of Sandboxes

Jean from Kings Lynn wrote asking for advice on how to keep cats from pooping in her kids sandbox. She tells me the culprits are neighbours cats. How to keep cats out of your sandbox Keep it covered – even a tarpaulin weighted down will do for now Consider replacing the sandbox with one that…

There seems to be mixed messages online regarding lavender plants and cats. As lavender is one of my favourite shrubs I though I would do some testing and digging…. Do cats like lavender? While a minority of cats do seem to enjoy the aroma of lavender, the majority of cats do not. The ASPCA list…